This month's film is Gordon Parks: A Choice of Weapons

From his decades as LIFE magazine’s first Black photographer, to composing music, writing memoirs and novels, and directing feature films, multitalented trailblazer Gordon Parks used his camera as an instrument of change – a “weapon” as he called it – to challenge systemic racism and poverty. Through the lenses of Devin Allen, LaToya Ruby Frazier, and Jamel Shabazz – contemporary photographers who credit Parks as a formative influence – as well as interviews with Anderson Cooper, Ava DuVernay, Spike Lee, and many others who speak to his enduring impact, this feature documentary pays homage to a true American legend whose work stands at the pinnacle of 20th century socio-historical documentation and serves as an empowering springboard for contemporary and future artists. 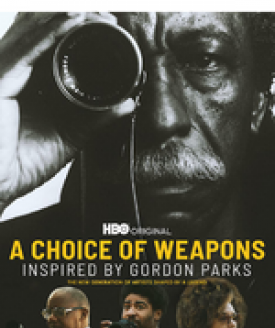