In this online Farmers Night program, father and son storytellers and musicians Joseph and Jesse Bruchac of the Nulhegan Abenaki Nation will use drum, flute, rattle, and vocals to address the continued presence and vibrant cultural heritage of the Wabanaki Nations of Ndakinna, with special emphasis on the years of the Vermont Eugenics project and the long struggle for government recognition

Dr. Joseph Bruchac is an internationally known storyteller, writer, and musician with over 170 books in print, including many titles focusing on Wabanaki history and culture.

Jesse Bruchac is a fluent speaker of the Abenaki language and has performed throughout the United States and abroad as a musician and traditional storyteller. Author of several bilingual books and also an extensive dictionary of the Abenaki language, He has worked as a translator and language coach for a number of television and film projects, including the PBS series Jamestown and the National Geographic movie Saints and Strangers. 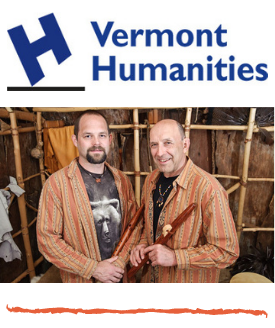 We are partially open. The Tech Ctr. & Browsing are closed. Click here for info.

The Library will be closed for library services on Tuesday, March 2 for Town Meeting Day.