Winner at nearly 20 major film festivals including the Grand Jury Prize at Sundance, Southern Comfort has mesmerized audiences and critics alike with its rare blend of humor tragedy and romance. At its heart is a beautiful and remarkable love story more touching and captivating than anything fiction could ever create. With a masterful eye for emotional detail award-winning filmmaker Kate Davis takes us to the back hills of Georgia and into the world of Robert Eads a 52-year-old wise-cracking cowboy warm and gregarious who was born female and later transitioned into living as a man after bearing two sons. The film finds Robert fifteen years later during the extraordinary last year of his life as he falls headlong into a passionate romance with Lola a vivacious and magnetic woman who was born male.  Southern Comfort is an illuminating and deeply moving film--a world of contradictions where good old boys who drive pick-up trucks and shoot the breeze around the barbecue double as 21st century pioneers courageously forging a new world for themselves and for us.  Not rated. 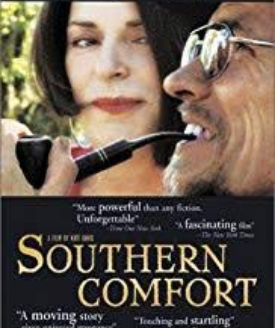 We are partially open. The Tech Ctr. & Browsing are closed. Click here for info.