Join other readers at this online discussion on Zoom of Jill Lepore's These Truths: A History of the United States
Contact: Barbara Shatara at bshatara@ burlingtonvt.gov for Zoom info and how to obtain the book.

Jill Lepore’s one-volume history of America places truth itself―a devotion to facts, proof, and evidence―at the center of the nation’s history. The American experiment rests on three ideas―“these truths,” Jefferson called them―political equality, natural rights, and the sovereignty of the people. But has the nation, and democracy itself, delivered on that promise?These Truths tells this uniquely American story, beginning in 1492, asking whether the course of events over more than five centuries has proven the nation’s truths, or belied them. 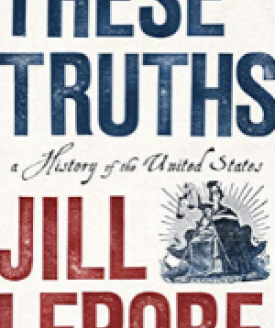