When the Berlin Wall fell under the pressure of peaceful protests on November 9, 1989, the highly fortified border that had separated the two German states also became obsolete.  Less than a year later, East and West Germany reunited.   Vermont-based writer Kerstin Lange joins us for a talk about the 30th anniversary of the Berlin Wall's fall.

Kerstin Lange traced the 900-mile-long former border by bicycle and on foot to investigate the legacies it left in the land itself and in the lives of the people who had to live with it. Kerstin tells the story of the border itself – its layers of history and its transformation into Germany’s longest, skinniest nature preserve – and share reflections from the people she met on her expedition.

Header is an aerial photo of the Green Belt (the nature preserve that took the place of the border) by Klaus Leidorf. 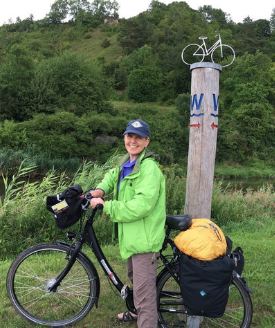