The Vermont Racial Justice Alliance and Fletcher Free Library presents the 1619: Arrival of the First Africans Traveling Exhibit from the Hampton History Museum (VA).  Drawing on the latest research, this exhibit tells the story of the Africans' home in Angola, how they came to be enslaved aboard a Spanish slave ship San Juan Bautista, the terrible 10,000 nautical mile voyage that brought them to Virginia, and their lives on the farms and plantations in the new colony.

This exhibit follows the Vermont Racial Justice Alliance sponsored First African Landing Vermont Commemoration (August 24, 2019) and is designed to honor the spirit of the 400 Year African American History Commission; to recognize and highlight the resilience and contributions of African-Americans since 1619; acknowledge the impact that slavery and laws that enforced racial discrimination [have] on the United States; and educate the public about the arrival of Africans to the [English colonial] United States and the contributions of African-Americans to the United States.

The exhibit will be on display at the Fletcher Free Library from December 5th through December 15th.  The exhibit will open with a reception at 1:00 PM and close with a commemoration ceremony at 6:00 PM, on 15 December 2019. 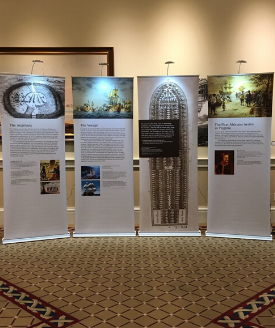