The Spirit of Summervale Concert Series: Presented by the Intervale Center

Ryan Montbleau’s been pouring his heart out in song since the early 2000’s, when he first began performing around his native Massachusetts. He’d go on to collaborate with Martin Sexton, Trombone Shorty, and Galactic among others, and share bills and stages with artists as diverse as Tedeschi Trucks Band, Ani DiFranco, The Wood Brothers, Rodrigo y Gabriela, and Mavis Staples, but it was Montbleau’s ecstatic headline shows—often more than 200 of them a year—that solidified his reputation as a live powerhouse and an inexorable road warrior. NPR’s Mountain Stage compared his “eloquent, soulful songwriting” to Bill Withers and James Taylor, while Relix hailed his “poetic Americana,” and The Boston Herald raved that “he’s made a career of confident, danceable positivity.”

During set break we will hear from featured sponsor Ceres Natural Remedies.

Tune in as we go LIVE at 6:30pm on our Facebook and Instagram pages. For more info: https://www.intervale.org/summervale 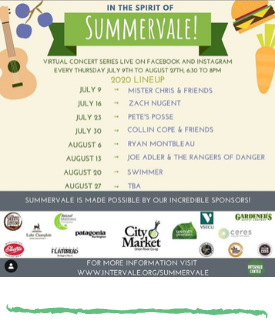