FFL will be streaming this year's National Book Festival from the Library of Congress.  The schedule is not available yet, but check back soon for updates.

The Library of Congress National Book Festival is an annual literary event that brings together best-selling authors, poets and illustrators with thousands of readers for book talks, panel discussions, book signings and other engaging activities. Over the course of its 20-year history, the Festival has become one of the most prominent literary events in the nation.

The theme of this year’s festival, “Open a Book, Open the World,” will be the starting point for many conversations with authors, often discussing how their own books open up new worlds for their readers.  Get more information at the National Book Festival website.

A sampling of this year’s National Book Festival lineup includes:

Kacen Callender, who received the National Book Award for “The King and the Dragonflies.”

Michael J. Fox, the actor, activist and founder of a foundation dedicated to finding a cure for Parkinson’s disease, has written a memoir, “No Time Like the Future: An Optimist Considers Mortality.”

Tana French, the widely praised crime writer, will talk about her latest novel, “The Searcher.”

Diane von Fürstenberg, the world renowned fashion designer, is the author of “Own It: The Secret to Life.”

Roxane Gay, the author, editor, advice columnist and social activist will discuss the graphic novel she co-authored, “The Sacrifice of Darkness.”

Nikki Giovanni, the prize-winning poet of more than a dozen collections, has recently released “Make Me Rain.”

Annette Gordon-Reed, author of the critically acclaimed “The Hemingses of Monticello,” is out with “On Juneteenth,” a story of the day’s importance to history, from a native Texan.

Adam Grant and Mishal Husain on the skills needed in today’s world, as provided in their books “Think Again: The Power of Knowing What You Don’t Know” (Grant) and “The Skills: From First Job to Dream Job – What Every Woman Needs to Know” (Husain).

Yaa Gyasi has followed up her acclaimed debut novel, “Homegoing,” with the equally praised “Transcendent Kingdom.”

Maria Hinojosa, the award-winning public radio journalist, talks about her experiences in “Once I Was You: A Memoir of Love and Hate in a Torn America.”

Kazuo Ishiguro, recipient of the Nobel Prize in Literature, will discuss his new book, “Klara and the Sun.”

Chang-rae Lee, the much-lauded writer, has a new novel, “My Year Abroad,” and he will be in conversation with Viet Thanh Nguyen, who has written a sequel to his Pulitzer-winning “The Sympathizer,” called “The Committed.”

Silvia Moreno-Garcia will discuss her genre-bending horror novel, “Mexican Gothic,” and her most recent book, “Velvet Was the Night,” with Sarah Pearse, whose debut novel, “The Sanatorium,” has earned rave reviews.

Christopher Paolini discusses his debut science fiction novel, “To Sleep in a Sea of Stars,” with Martha Wells, who continues her Murderbot Diaries novels with “Fugitive Telemetry,” the sixth in the series.

Mary Roach, who brings her unique blend of humor and science to her newest book, “Fuzz: When Nature Breaks the Law.”

Marcus Samuelsson, superstar chef and restaurateur, has published “The Rise: Black Cooks and the Soul of American Food: A Cookbook.”

Angie Thomas, the best-selling author of “The Hate U Give,” has followed up with “Concrete Rose.”

Isabel Wilkerson, Pulitzer Prize winner and author of “The Warmth of Other Suns,” has published another seminal work, “Caste: The Origins of Our Discontents.” 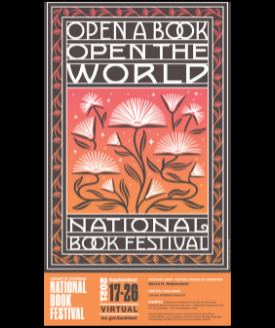 Masks are recommended in library and required in youth area, regardless of vaccination status.