Expect to be entertained with surprises, tricks, music and laughs. Recommended for ages 5 and up, but all are welcome.

The Perils of Mr. Punch

This is the one and only Punch and Judy, presented live, and updated for the 21st century.

Allow Mr. Punch to remove your bad mood, in this absurdist delight for four out of the five senses. Watch as Judy tames unruly plumbing while avoiding the jaws of  the carnivore du jour! And, feast your eyes upon the diaper change that should not be!

It’s a melodrama of epically small proportions, and it’s so funny that you’ll forget to take out your phone for at least the first half hour.  It’s a low-tech old-time spectacle, as entertaining to the masses of today as it was three hundred years ago.

The hand puppets are created from up-cycled designer trash and performed in an eccentric itinerant puppet stage. The show is hosted per tradition by a “bottler”, the uku-lady Rose Friedman. Justin Lander, showman of the absurd, portrays all the characters.

The program is rounded out with live music played on a variety of instruments, from the cornet to the bicycle pump.

Modern Times Theater has been adapting and updating Punch and Judy puppet shows, creating Vaudeville acts, and writing original novelty songs for over a decade.  They pursue a radically divergent model of art making, creating venues in unlikely locations, and revitalizing the historic, run-down, and defunct. Working in populist theater forms, they seek to reinvent and reimagine classic American entertainment.

Co-founders Rose Friedman and Justin Lander are a husband and wife duo, producers for Vermont Vaudeville and alumni of the Bread and Puppet Theater.  Parents themselves, they strive to present quality entertainment that the whole family can enjoy. 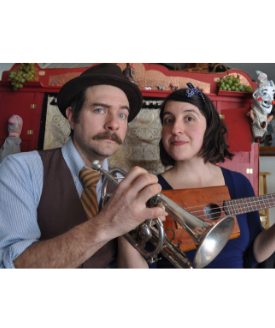