June 21st is Make Music Day, an all day “Across the ZOO-niverse” festival will be making noise in the Main Reading Room. The event will host a remarkably diverse line-up of Vermont musicians. They are coming together to celebrate inclusiveness and the vital role libraries play in nurturing democratic communities and an open society, while protecting the common good and freedom of speech.

“This extended live music showcase of artists from across the state is diverse in genre, gender, age, and culture, explained James Lockridge, co-instigator of the event and executive director at Big Heavy World. We want to highlight literacy, mindfulness and respect - and the intensity with which Vermonters love our libraries where all these values are cherished and celebrated daily."

The event’s distinct line-up was corralled by co-producer Senayit, who is also one of the day’s featured artists. “Musically, culturally, and creatively, Vermont is home to an increasingly diverse and vibrant music scene,” she explained. “In the many years I have been performing in and producing shows, I have also witnessed the shift and evolution in artists who use their platform for activism and community work. This brings a depth and purpose that has been missing in the mainstream for too long.”

Of equal importance to planning for, celebrating and advocating for community with this event is the choice of the date, June 21st , which is also Make Music Day, a growing worldwide phenomenon now celebrated in 120 countries across the planet. Make Music Day began in France in 1982 and inspires free community celebrations of music in more than 800 cities around the world. Volunteer-staffed local music champions Big Heavy World brought Make Music Day to Vermont, the first statewide participant in the international festival. For more information about Make Music Day, visit bigheavyworld.com/makemusic.

Jenn Grossi, David Rosane and the Zookeepers, are book-worms at heart and they tour summers to raise funds and awareness of the vital role, often overlooked, that public libraries play in our lives. This Fletcher Free Library event marks the kick-off to the 2019 edition of their "Across the ZOO-niverse Vermont library benefit tour" that will play in 15 other towns throughout the summer.

The band has their work cut out for them, with Vermont famously harboring the highest density of libraries per capita in the country.

Live performances are scheduled 1pm-7pm and the event is free and all-ages.

The Burlington show has received the sponsorship of City Market Coop, Advance Music, The Vermont Department of Libraries, Fletcher Free Library and more.

Senayit: Singer-songwriter/pop-rock/neo-soul. Senayit’s intuitive musicianship allows for a freedom of movement and expression indicative of jazz players, yet this is contemporary alternative rock and soul-based music which grounds itself in the influences of Radiohead, Florence and the Machine, Lana Del Rey, The Black Keys and formidable elders such as Led Zeppelin. http://senayit.com/

David Rosane & The Zookeepers: Fringe Protest Rock. The Zookeepers are an original, award- winning rock band that defies categorization. Last summer their library tour debuted in 14 towns raising $5k for literacy and community programs. After retooling outreach and under-writing for 2019 they aim to raise $10k and are scheduled in 16 Vermont towns this summer with an eye toward the future. “The Zookeepers’ Library Tour has attracted state-wide media coverage about the vital role of rural libraries defending democracy and free speech as well as their evolving relevance in today’s changing world.” — Charen Fegard, Vermont State Representative. http://www.davidandthezoo.bandcamp.com

Emma Back: Avant-Folk singer-violinist. Eastern-European influence. Emma uses a loop pedal to create lush layers of rhythm and harmony, accomplishing a sonic and poetic lyricism that reaches deep into the past and far into the future simultaneously. With lyric content that investigates how to heal personal and global conflict, “(Back’s) charming sensibilities, excellent structuring and arranging, as well as her ability to confound emotionally will likely bring listeners back for repeat encounters.” (Jordan Adams, Seven Days VT). http://emmabackmusic.com

Hunter Paye: Singer-songwriter/ americana-soul. Masterfully-crafted songs as diverse as his travels with engaging vocals and top-shelf lyrics. One of Vermont’s finest singer-songwriters, Hunter has toured the country many times, opened for Train and countless others, and releases his 5th studio album ‘Arrows In Orbit’ in the Spring of 2019. www.hunterpaye.bandcamp.com/ 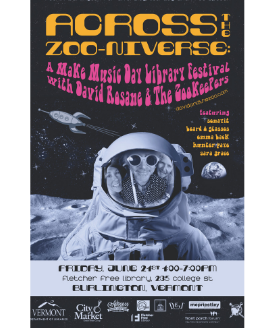